You are here: Home

ANTIKYTHERA MECHANISM Translation of the PATENT (from German to English)

2. Object of the Invention.

The production of a functioning device in order to faithfully simulate all display indications of the Antikythera Mechanism, as rotation of the celestial globe, Astronomical time, Synodic and Sidereal months, lunar phases, solar and lunar eclipses, Saros cycle, Metonic Calendar with 235 Months of the 19 years cycle, Old Egyptian Calendar of 365 days, position of the Sun in the Zodiac.

3. Introduction: Actual level of the technique

The fragments of a Mechanism recovered in 1902 from a shipwreck at a depth of about 42 m. near the Greek island of Antikythera, in the Aegean Sea, south of the Peloponnese, showing some gears, since then known as the Antikythera Mechanism, proved to be more complicated and are still the subject of extensive studies and publications by several amateurs and scientists; here some Names: Svoronos, Stais, Rediadis, Theophanidis, Rehm, Price, Karakalos, Bromley, Wright, Tatjana van Vark and a team of scientists from the Universities of Athens and Thessaloniki (GR) and Cardiff (UK), (Freeth, Jones, Steele, Bitzakis, Seiradakis, Zafeiropoulou, Mangou, Moussas, Athanasiou, Edmunds, and others under the auspices of the Ar-cheological Museum of Athens (abbreviated: AMA), with the help of high specialized, internationally named Companies, as HP (with Mr. Malzbender and others) and X-Raytec (with Mr. Handland) dealing since 2006 with the enigmatic ruins furnished 3D Photos of previously 2160 letters from the PARAPIGMA (= Instructions) and about precisely identifiable fractions of gears with triangular teeth. There are read some astronomical and geographical terms imprinted on the fragments as complete words for example, ΕΓΛΕΙΠΤΙΚΗΣ, ΝΕΜΕΑ, ΙΣΘΜΙΑ, ΟΛYΜΠΙΑ, ΕΛΙΚΙ, ΑΡΗΣ, ΑΦΡΟΔΙΤΗ, ΓΝΩΜΩΝ, ΑΕΤΟΣ, ΛΥΡΑ, ΥΑΔΕΣ, ΠΛΕΙΑΔΕΣ, ΤΑΥΡΟΣ, ΔΙΔΥΜΟΙ, ΑΡΚΤΟΥΡΟΣ (ecliptic, Nemea, Isthmia, Olympia, Eagle, Lyra/Leier, Hiades, Pleiades, Taurus, Gemini, Arctur).

Theophanidis was the first man, who recognized (1934) the five (5) grooves of the upper half of the back side of Mechanism, where the pins supported two pointers, and also the four (4) grooves in the lower half of the back side of the fragments. On the front side Theophanidis recognized the names of months of the old Egyptian Calendar, which later (1974) Price confirmed.
He read the names (in Greek letters) of two (2) Zodiacs in a quarter of a annular disk with angle-indication of a goniometer in a another fragment. 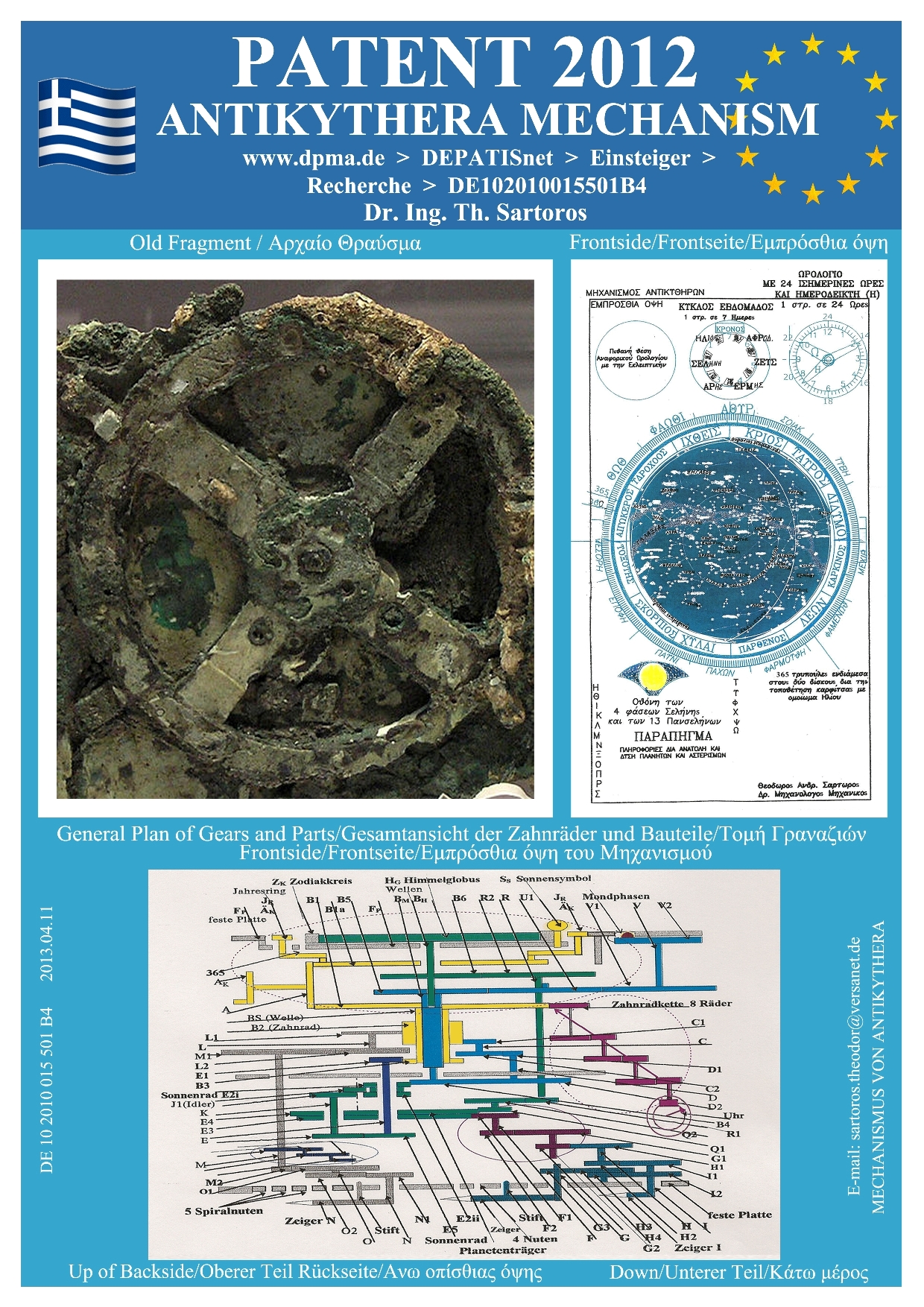 and the Romans tinkerer . This widespread opinion may rebut a salvaged from the depths of the Aegean part .

After emerging from a depth of 42 m. in the Aegean Sea near the island of Antikythera recovered by sponge fishermen in 1900 AD from a Roman shipwreck , which was fully loaded with looted from Greek cities, cultural goods, the unit got the 1's name , " Bronze plates " and ended up in a wooden box ; after sorting the finds

in the Archaeological Museum of Athens ended up with the second name "lump " in a trash can .

The archaeologists were from the other finds ( bronze and marble statues etc. ) enthusiastic and none gave the "lump " attention. It is a godsend that the clumps survived the scrapping. The Greek Minister of Culture Valerio Stais happened to go past the camp of the Archaeological Museum and took the lump in his office with ; he discovered the lump some gears and the Greek letters and J. 1902 , the first message appeared in an Athens newspaper about a mysterious gear mechanism with Greek letters .

The Minister was risking not only his credibility but also his post ; he reaped from

the critics just spiteful laughter. Gears from the Greeks ? hardly anyone believed it.

By 1934, the country Greece experienced a series of local wars , the Balkan War , the 1s world war , a military defeat in 1923 , followed by military coups and dictatorships ;

the lump had been forgotten. Only in 1934 , the Greek admiral Theophanidis made ​​sketches of the gears and the words he could read , and provides a report in French about the finds in the sea of

Cookies make it easier for us to provide you with our services. With the usage of our services you permit us to use cookies.
More information Ok Decline